In the January issue of Sharpeners Report, Judy Brenner interviewed Randy Kinney and me on the new harmonic treatment we are using to strengthen metal for sharpening. We are very excited about the attention that this process is receiving. If you have any questions about our harmonic treatment or want to try the service for your own instruments, give me a call at 800-972-9223 or email me at dkind93@gmail.com. You can also visit my webpage dedicated to explaining the harmonic treatment in more detail: https://dk-industries.com/2017/02/05/harmonic-treatment-gets-micro-sharp-edge/.

Here is the article from Sharpeners Report:

Did you know that there are microscopic fissures, gaps and cracks hidden in the surfaces of metallic tools and instruments? These cause the metal to underperform and wear at a faster rate. DRK Technologies has developed a process whereby “The MicroEdge” removes such defects, enhancing a tool’s performance and extending its lifespan by 300-500 percent, according to co-owners Randy Kinney, DRK Technologies, Knoxville, TN and Dean Koeneman, DK Industries, in Kentucky.

This treatment penetrates all the way through the steel. The experiments have been going on for more than a year, and now are ready to market to other sharpeners and end users. Price points are still being established, but considering the process is said to triple the life of a blade edge, it has been suggested $65 for shears; $10 for dental instruments; and $12 for clipper blades. Machine tools vary, based on volume.

“This metal treatment not only increases the lifespan of a device, but also, improves its maneuverability and cut. Cracks within an instrument allow it to flex and move. But once these gaps are closed, the tool will perform with finer precision,” Randy said.

Typically, the outer layer of an instrument suffers the greatest amount of stress after heat-treatment. Each time an untreated tool is sharpened, its outer layer is removed, requiring the tool to be recoated after each regrinding. But The Micro Edge eliminates the need for coatings altogether, allowing for twice the number of regrinds. “Once an instrument undergoes The Micro Edge treatment, achieving the desired level of sharpness will require removing less material from the cutting edge,” Randy says. His other company, Knoxville Blade Sharpening & Bio Med Repairs, has tested the process on behalf of customers. “We’ve been giving tools to clients since May 2016, and the feedback has been very positive,” he said. Sharpeners Report sought out some opinions to see what end users thought. Here’s what was reported.

Kim Hodges, Shear Techniques, has a 3-chair salon in Halls, TN. “We had our scissors treated with the metal edge treatment by DKR Technologies. Our Japanese steel 5 inch beauty shears are used for both blunt and point cutting. We could tell it was an amazing difference. It glides through the hair better,” Kim said. She went on to say: “We don’t drop our scissors. You don’t see the difference, but you can feel it. When you open and close them, when you are cutting hair, sometimes we try to keep oil on blades, sometimes when it is time to get them sharpened, it was nipping at the hair. Now we’ve treated them six months ago, we normally have them sharpen every 3 to 4 months. These are still sharp and working quite well. We were called to see if we need them sharpened and we don’t. They are still working beautifully.”

Todd Bauer in Louisville, KY is a former platform artist with Aveda, and said he was impressed. “I was quite surprised! These seem more precise. I was blown away,” Todd said, after getting one pair of his shears treated. Todd uses the 6” Hakuri shear daily, doing 10 haircuts a day. He owns 15 of the same brand shears, and he said he mostly can’t tell these from a new pair, which is still in the wrapper. “I haven’t needed the new pair at all!”

Tara Perry, a hygienist who works with Dr. Mark Luck in Knoxville, owns a traditional tool assortment of scalers and more. She said normally they sharpen the instruments themselves on different stones. “It takes a lot of time out of your day, so I don’t mind having a professional service handle them,” Tara said. She explained there are high end stainless steel instruments and 2nd tier cheap ones. “The techniques and coating used by Kinney Surgical made my 2nd tier instruments last as long as the higher quality ones!” She said working with a sharper tool “saves my wrist!” (Carpal tunnel is prevalent among hygienists, she said.)

The micro edge process is also applicable to clipper blades and machine tools, specifically any cutting tool such as end mills, drilling broaching, punch & dies, and some others that have abrasive wear. More information will be available during the Sharp Fest where DRK Technologies will have the Micro Edge exhibit.

For more information about the DK shear renewal offer, please contact me by calling 800-972-9223 or by emailing dkind93@gmail.com.

After 25 years of using heat to temper steel, I learned that heat only tempers the outer third of the steel.  This is why the sharpening of an edge doesn’t last as long with each sharpening.

Recently, I discovered a new way of tempering the steel all to its core, thus improving its edge by 300%. This method is the harmonic treatment and it is an innovative, patented metal treatment that uses sound waves to reach the steel’s core.

>>This harmonic treatment was featured in the January 2017 issue of Sharpeners Report . Click here to read the article!

The microscopic fissures, gaps and cracks hidden in the surface of the steel causes the steel to underperform and wear at a faster rate. This harmonic treatment removes such defects, enhancing a shears performance and extending its life span by that 300%.

This steel treatment not only increases the life span of a shear; it also improves the cutting action by 2/3.  Using more cutting surface means sharper and easier cutting and means a longer-lasting edges.

Types of tools that would benefit from the harmonic treatment include, but are not limited to:

If a tool has to be re-sharpened or reground, then it’s a perfect candidate for the harmonic treatment 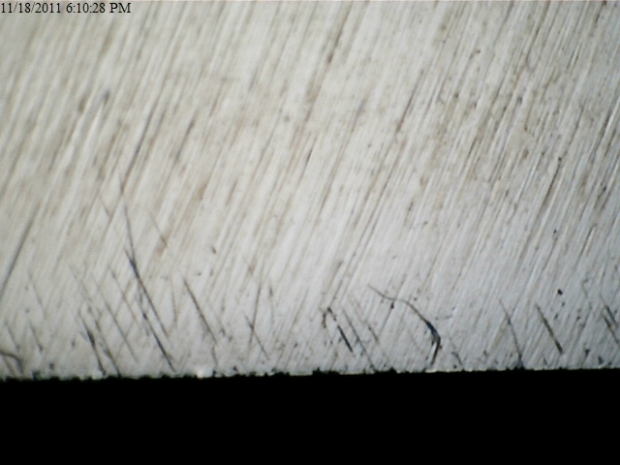 The edge of before the harmonic treatment, magnified 100,000 times. You can see the jagged edge of the sharpened blade.

The same edge after the harmonic treatment, magnified 100,000 times again. This edge is smooth and has a straight line.

For more information about the harmonic treatment, please contact me by calling 800-972-9223  or by emailing dkind93@gmail.com.

Owner and sharpener Dean Koeneman recently joined his community’s Rotary Club. The Rotary Club is dedicated to service above self, and Dean is excited about joining.

In addition to the quality and all the perks of owning a D.K. Shear, we can modify the shears to your specification, making this tool tailors to you.

END_OF_DOCUMENT_TOKEN_TO_BE_REPLACED

I can’t believe that it’s been 20 years since I trained Randy in sharpening. He and his sons have been the sharpest guys in Tennessee for two decades.  Congratulations to a good group of guys and just another great small-business in America!

And the right combination of the two. . . the best

“Innovative by tradition” has been TONDEO’s recipe for success for more than 80 years. Today TONDEO is one of the world’s leading manufacturers of hairdressing shears. Their shears and razors are convincing in terms of technology and design. They are specifically tailored to your requirements. Even in the manufacture of these little “masterpieces,” TONDEO relies on the right combination: state-of-the-art machines and precise hand work, technologies and years of know-how allow high-quality unique items to be created.

END_OF_DOCUMENT_TOKEN_TO_BE_REPLACED

The Instrument Renewal System is a high-tech reconidition system that will permanently remove all the rust and strains from the surface of an instrument. Metallurgists, chemist, and metal manufactures from all over the country worked together to come up with a solution. DK Industries spent years putting this their knowledge to working, creating the perfect reconiditioning system. It is both mobile and safe; DK has since spent the last 25 years using this, the most effective system.

END_OF_DOCUMENT_TOKEN_TO_BE_REPLACED

If you need your shears sharpened before we can get to you, mail to us! Shears recondition is just $25.00.